What’s with those creepy crawlies?

Let’s take a closer look at our smallest and, let’s face it, creepiest of staff. These beetles are typically the last group of scavengers to arrive at a carcass, with the first adults appearing 5 to 11 days after death.

ANSWER: Dermestes maculatus – nothing quite preserves the quality and integrity of the skulls the way these beetles do!

Welcome back to Osteology in Action! Today we’re going to take a moment to focus on the hardest workers in our museum. That’s right, we’re talking about beetles. These industrious little critters can strip a dog skull in 2-3 days. Which is good because our parent company Skulls Unlimited, Inc. cleans roughly 2,000 specimens in a month.

But surely there’s got to be a better way, right? I mean, most people would balk at the idea of millions of flesh-eating beetles working alongside them, so why is it that we elect to use these guys? The answer is simple, there isn’t a better way. When our founder first started collecting and cleaning roadkill as a hobby, he tried many methods of removing the soft tissue. However, nothing quite preserves the quality and integrity of skulls the way the beetles do.

So, let’s take a closer look at our smallest and, let’s face it, creepiest of staff.

The species of beetles we use at the museum is Dermestes maculatus, colloquially called “hide beetles”. They belong to a large taxonomic family, Dermestidae, which contains between 500 to 700 species. Most species feed on dry organic materials. Some are pretty easy to please, like ours, but some are incredibly choosy about what they eat. One genus of this family is known as “bow beetles”, because their first choice of dinner is the hair of a violin’s bow.

While our beetles aren’t picky eaters, they do care about is how old the carcass is. These beetles are typically the last group of scavengers to arrive at a carcass, with the first adults appearing 5 to 11 days after death. This is part of the reason that we dry our flensed skulls before putting them in with the beetles. One it cuts down on smell (kind of) and two they tend to feed on it better than they would a “fresh” specimen.

Upon arriving, the beetles eat and breed. Eating flesh isn’t the only thing they excel at, a single female lays as many as 800 eggs. These eggs hatch with in 3-4 days. The larvae then gorge themselves for 5-7 weeks, preparing to pupate. They pupate for 7-10 days before reaching adulthood. The life cycle in its entirety takes about two months, with the full life span ranging from 4 to 6 months. This happens like clockwork, meaning that if there is a good source of food (like, say, 200 carcasses to process) you can maintain a large colony without worrying about the mortality rate.

This predictable life cycle is valuable for another reason. Forensic entomologists make use of these beetles to determine time of death. By taking into account the weather (the beetles’ optimal temperature is 30°C/86°F) and the point in the life cycle that these beetles have reached, specialists can determine the time of death. Additionally, they can be used for entotoxicology in order to see if toxins were present at the time of death. Even better, they are present on every continent except Antarctica, meaning that the results can be used semi-universally.

“That’s great,” you say, “but why would you bring them into a museum?” Well, although these beetles are typically considered a pest, museums have used them successfully to prepare specimens for over 150 years. The truth is that they are simply that effective. This doesn’t mean that there aren’t drawbacks. At our Orlando location, we did have some beetles escape and eat a hole in one of the taxidermied bat wings. However, it’s safe to say that the benefits far outweigh the deficits.

Exploring Oklahoma: Museum of Osteology a One-of-A-Kind Treasure Do you have a child so fascinated with a hobby that you fear that it’s taking focus

How weird can a woodpecker’s hyoid bone be?

While the human hyoid is a simple small bone, there are several species with fantastically weird hyoid bones that have even more specialized uses. We’ll 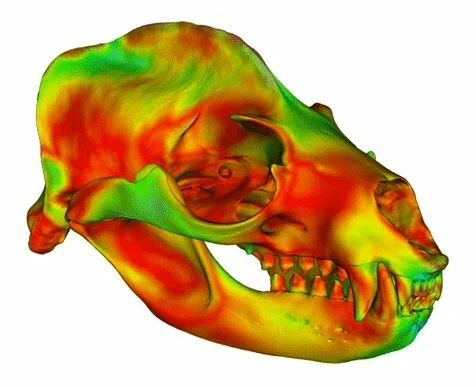 How do museums use 3D imaging?

3D Digitization of Skulls at the Museum of the Osteology, Oklahoma CityAlexander Prucha, PhD Candidate, George Washington University Last December, I got to have some